Action Tracker is a simple yet effective take on the productivity model advocated by David Allen in his “Getting Things Done” system.

The program is based on the FileMaker Pro software and uses this basis to create a clean, functional and fairly minimalist design for users to sort and manage their tasks through.

The official home of Action Tracker is at Macproductive.com but it appears that the site is no longer registered or the company has let is lapse out of error. The application can be still downloaded from various Mac Download sites for free. 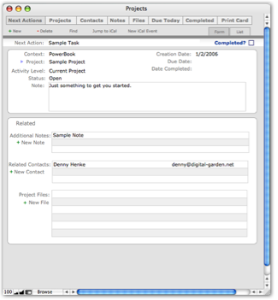 Visuals with Action Tracker are fairly average but ultimately succeed in the essential goal of encouraging easy navigation and access to the extensive feature set provided by the platform.

Those already acquainted with FileMaker Pro should find a certain level of familiarity in the aesthetics presented here. Action Tracker possesses the same level of Mac sheen that most of the OS’ first-party programs host — a factor which ultimately works to make it into a clear and graphically sound choice for a productivity software foundation.

Action Tracker’s strongest suit is undoubtedly the number of features made available by the program. The aforementioned FileMaker Pro platform has enabled Action Tracker’s designers to offer a wide variety of options and customization for users to take advantage of.

All of the GTD staples devotees have come to expect in software (to-do lists with contexts, reminders, status and so forth) are in place with Action Tracker. Each element of sorting and organizing has been paid good attention as well and the detail provided in sorting is fantastic.

Users are able to micro-manage each item through the attachment of external documents (including Excel, PowerPoint, and Word file extensions aside the support for photo, video and PDF formats) while also enjoying the ability to link work with web and email addresses through a simple, clickable interface.

List items can also be linked together for easy reference across the system, a touch which aids in ensuring smooth navigation and speedy movement from project to project.

Action Tracker could have benefited from the inclusion of mobile application support but it’s clear that Denny Henke, designer of the system, is working on a limited budget so far.

The system makes up for this shortcoming with the presence of a feature which prepares selected lists for note card printing, a low-tech but ultimately effective method of addressing portability for serious, regular users.

If there is a major flaw in the Action Tracker system it can be attributed to the previously mentioned strengths in feature creation. Although the FileMaker Pro foundation allows for a fantastic level of customization and depth to the software, the uninitiated may have a fairly difficult time figuring out how to get started with their work.

The program isn’t overly complicated but learning its intricacies is somewhat daunting for those who are being exposed to FileMaker Pro for the first time via Action Tracker.

A greater level of community involvement could have gone a long way toward addressing the issues with Action Tracker’s learning curve. While users are still able to seek out guides, tutorials and forums through external sources, the main project homepage lacks in any real aid for those just taking the system for a spin.

The creation of a hosted message board or tutorial would go a long way toward helping out novices with getting the most from the system and will hopefully see an appearance in the future.

Ultimately Action Tracker is a solid choice for GTD adherents who are enticed (rather than put off) by the idea of a productivity platform which requires a good amount of invested time to warrant proper results.

Their may be an issue with the ongoing support and development for the application as it would appear that the domain is no longer being used by the team behind Action Tracker.

The fairly no-nonsense approach to Action Tracker’s core features combine with the depth and customization possible within them to create a difficult but rewarding productivity system.