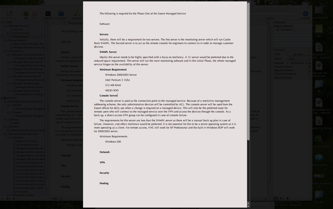 Over the past couple of weeks I have been writing more than ever. Not so much on this blog but I have had to write quite a lot of documentation on a job I am working on right now.

Now, I am no stranger to writing, having authored several technical books so I am pretty well versed in the art of writing. Well, most of my writing to now has been using Microsoft Word. The majority of my books were written before I got my first Mac and well before the advent of Web 2.0. Now, I am using a Mac and also services such as Twitter, iChat, Adium, Skype etc.. In fact, I am pretty easy to get a hold of, and people know this. I have gathered quite a few online contacts and my Twitterific application tweets at me quite a lot. All very good, but all very much against the concept of Getting Things Done!

We must now live and work in the “era of distraction”. This can be a killer when you have multiple documents to write. I guess that some software developers have also agreed with this idea with the release of several applications aimed at removing you to focus solely on the task at hand.

END_OF_DOCUMENT_TOKEN_TO_BE_REPLACED

I have been a great fan of Zig Ziglar since I was intrigued by hearing his name in 1999. I cannot believe that it is 8 years ago now! In that 8 years I must have heard nearly everything that Zig has produced, including reading quite a few of his books and his auto-biography.

If you are not already, now is a great time to subscribe to this blog in your favorite RSS reader so you can keep up to date with all the posts.

Anyway, for those of you who do not know who Zig Ziglar is, or what he does, well, Zig Ziglar is a US speaker that talks on subjects such as goal setting, sales skills, motivation, and relationships. Zig is what I would consider very traditional in his ways and he tries to instill good old fashioned values via his speaking with his famous personal saying being:

You can have everything in life you want, if you would just help enough other people get what they want!

I aim to blog a lot more about Zig Ziglar and other speakers that I also listen to as I have gained a lot from listening and studying the methods and values these people speak about.

Anyway, the reason for this blog entry is that Zig has just embraced the Web 2.0 community and he is now doing a weekly Podcast. This Podcast is made up of audio and some video Podcasts. Some of this is new material and some is snippets from existing records from Zig. If you like Steve Pavlina, you will love Zig Ziglar.

Be sure to check the Podcast out. You can also subscribe directly in iTunes and copy it to your iPod etc.. Let me know what you think and I will also write more about Zig.

I know this is not GTD related but I found a blog that had linked to DidIGetThingsDone.com and they had a cool blog entry that has 125 cool code snippets for web designers.

Now I know a lot of my readers are fellow bloggers and these types of code snippets will work fine within WordPress so I thought I would share the tips here as well as saving to delicious etc..

I hope you enjoy this find.

Just found a great GTD list over at Zen Habits. Why reinvent the wheel, so you may as well go ahead and check it out!

Over 40 blogs now that cover GTD, wow, we are gaining some real traction!

Thought I would bring you all another book review as I have just finished reading the auto-biography of Duncan Bannatyne, titled “Anyone Can Do It“.

Duncan Bannatyne has become well known in the UK but I guess that outside the US he is would be not as well known. People in the UK will know Duncan Bannatyne from the Hit TV show called “Dragons Den“. Dragons Den is now in its third year and has been a total surprise success for the BBC.

For those of you have not seen Dragons Den, it is a one hour TV program that normally runs around 10 weeks and it is one of my pick of TV shows that are worth the time investment. Dragons Den has a room of five so called Dragons, each a Self Made Entrepreneur Millionaire, or what Duncan calls a SMEM in his book. These Dragons all have a pile of cash, ready to invest in the ideas of the Entrepreneurs that the shows producers line up to pitch for the investment. So, this is like watching real life entrepreneurs pitching for investment, under the intense scrutiny of five SMEMs and the TV Cameras. All of this makes for compelling watching and great for watching peoples reactions under the pressure applied to them.

Anyway, back to the book. So, Duncan Bannatyne is one of the Dragons on Dragons Den, so I guess it was inevitable that an Auto-Biography would ensue.

The book is about Duncan’s life and how he has amassed a fortune of over Â£100 Million and inclusion into the Sunday Times Rich List. Duncan really did come from quite humble beginnings from Clydebank in Scotland. Hewas a late starter in the business world andhe started by owning and operating Ice Cream vans when he was 30. He then took a few risks that paid off and the book makes for very interesting reading on how a normal person can make a fortune just by working out simple maths against lucrative business deals.

Duncan has quite a story to tell that involves time spent in Prison, Drug Busts, Ice Cream Turf Wars and also telling some City Stock Brokers where to go very impolitely!

I picked up this book and could not put it down. I read it in a matter of days, taking every opportunity I could to read it. I really found it a motivating read, and if you are trying to be a Self Made Entrepreneur Millionaire, as I am, it is worth the Â£10 investment as learning from other people is one of my major beliefs for success.

The book can be found on Amazon.

There has been quite a lot of buzz around the GTD community about the long awaited OmniFocus from the Omni Group.

Anyway, there is an Alpha Introduction and Feature Demo video posted on the Omni Blog.

The video is around 26 minutes long and provides a great overview of the features within OmniFocus.

Be sure to check out the video. Well worth the time investment! 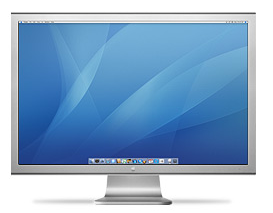 Well, it is known amongst my friends that I am waiting for Apple to release the rumored update to the 30″ Apple Cinema Display so that I can buy one.

I converted to the Mac around 18 months ago, starting with a 12″ iBook that I used to use as well as my Dell laptop running Windows XP. It was not long before the Dell Laptop went to somebody else at the company I then was a Director of and I purchased the upgrade to a shiny 17″ MacBook Pro. You could say that I have never looked back and I have converted quite a few others to the Mac way of life. Without boring you all here, if you need and/or rely on a computer for your income, try, and the you will buy a Mac. Sure, they do not play the latest games, so buy a PS3 as well! I was a total Microsoft addict, having being a Microsoft Certified Systems Engineer (MCSE) since 1995 and having made a considerable amount of money out of Microsoft consulting so I thought I would never buy a Mac, that is until I actually used one. I ate humble pie and it was the sweetest pie I have ever tasted!

Anyway, back onto the Cinema Displays. The Apple Cinema Displays are very nice. The 30″ will be fantastic for me as I spend most of my working days, and nights staring at my screen. Now the screen on my 17″ MacBook Pro is great, but the 30″ Cinema display is in a league of its own. Sure it is expensive, and people say the Dell 30″ is better value for money but my mind is made up that I want one, and I have saved the money to buy one. It is rumored that Apple are to release a new Cinema Display range, hopefully with built in iSights and also a HDMI input (handy for my newly acquired GTD distracting PS3).