Had a great week at InfoSec in London with RandomStorm.

I left early Monday and arrived home Friday. Luckily I have had the time to relax and progress my tasks and projects.

Tomorrow is a Public Holiday in the UK and I am looking forward to a day at home clearing a lot of tasks from my @Home context.

Here are my collection of links for this week.

Yet another busy week for me even though this is only a four day working week. I have to post about a cool little Mind Map that I have been pulling together.

Have a great week!

Tracks GTD is a Ruby on Rails web-based application that is meant to serve as a hub for users to organize their life and work within. The system is an open-source (hence, free) program from the Tracks team of developers and is an impressive platform which offers relatively immediate accessibility for anyone new to the application. 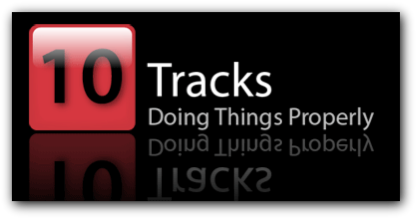 Tracks GTD looks great and is easy to get running as the installer even includes the WEBrick Webserver. The program runs smoothly on Windows and Mac operating systems alike.

There is a bit of clutter to get used to but nothing is so bad that it will get in the way of day-to-day use of the system. Everything looks very clean with functionality having obviously been placed as a priority of the design contributors working on Tracks GTD.

The homepage for the application isn’t too pretty but this shouldn’t be much of a deterrent for most users as it isn’t necessary to view every time the program is run.

Considering the level of in-depth coding which has gone into the Tracks GTD platform, the design does a great job of highlighting significant aspects of the program while stepping out of the way enough to ensure quick, smooth load times.

The interface hosts a lot of great features and represents a solid array of the organizational plans or tools set forward by David Allen in the Getting Things Done Methodology. Everything is extremely customizable, a fantastic trait for users who wish to play with the system and tweak it until it’s set up for the model that can provide them with maximum efficiency.

The system automatically refreshes new data entries and allows for quick updating of various categories and sub-categories (including GTD staples like Projects, Tasks, Next Action, and Someday/Maybe groupings) along with different geographical contexts (like at home, at computer, at phone and so forth).

Users can receive RSS, iCal and plain text feeds as well as highlighting and display options which pop-up tasks scheduled when they are chronologically relevant.

There is also a stat feature which displays your productivity over a set period of time through a visual display, a feature which isn’t really important but that still provides a bit of satisfaction for having achieved set goals and projects.

Some of the options are fairly unnecessary but, just the same, Tracks GTD doesn’t have any glaring flaws that should hold anyone back from giving it a try.

One of the best aspects worth mentioning in an overall review of the system is that of Tracks GTD’s ongoing development.

The open-source nature of the application makes it encouraging for feedback and new designs to be submitted to the Tracks team from those who have adopted the platform as part of their organizational process. This level of user interaction fosters a sense of community and encourages even better versions of Tracks GTD to be released in the future. 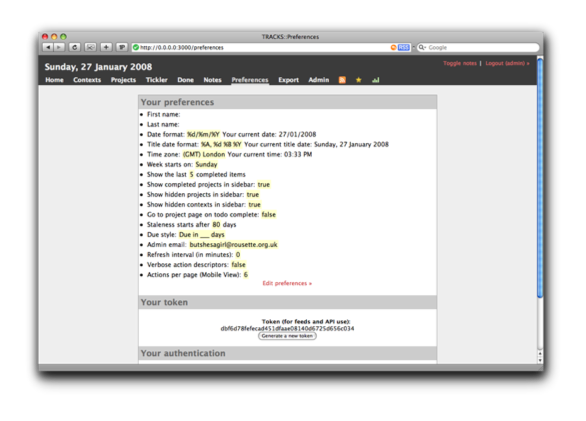 While there are other GTD organizational systems worth looking at, Tracks GTD is one of the best, downloadable options out there for those looking into implementing a GTD app in their daily life.

The platform is fairly unorthodox in terms of information input and display but Tracks GTD is also one of the most unique and deep programs currently available.

For that feature alone, it’s a good idea to take it for a spin yourself and see if it’s the right productivity tool for your work and life style.

Be sure to check out this Tracks Screencast that is in Quicktime format and as always, I love to hear your comments!

I have had a really big report to finish this week for a client, probably the largest I have ever done so my head has been busy and I have not had much time for blogging.

I am happy to say that I finished the report but I do not like having a piece of work that totally consumes your time. I feel trapped with this type of work and try my best to avoid it at all costs.

I have a lot going on and when I have to focus on a sole project like this for a whole week it does upset my rhythm. Surely something I need to look at and blog about!

Here are my collection of links for this week.

Don’t forget that if you have a great post that you would like me to link to, the best way is to link to me in your post as I pick up all trackbacks and usually respond in kind.

Hope you all have a very productive week ahead. I know I will!