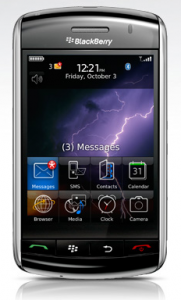 BlackBerry fans have been eagerly awaiting news of the newest model from the pioneering web phone company which develops the units. The Storm model has just been released in the UK with North American distribution scheduled for less than a week from now.

The BlackBerry Storm is an updated model of the popular gadget with brand new features which seek to provide some solid competition for Apple’s iPhone. Aside from the updated touch-screen features, Storm is also outfitted with a handful of additional updates meant to draw existing BlackBerry customers to the new model.

A remodeled digital camera/camcorder has been fit into Storm along with a re-imagining of the keyboard functions which made BlackBerry so prolific in the past. Users are able to choose between a traditional QWERTY layout or the updated SurePress and multi-tap, cell-phone style options.

While some users remain hesitant about adopting the BlackBerry Storm and it’s new, touch-screen approach, the company has added subtle effects (such as clicking sounds when keys are pressed) in order to keep the fan-base satisfied.

Generally superb reviews and years of development should help the wary ease their concern about picking up a BlackBerry Storm. The web phone is certainly a fantastic choice for those in the market for a mobile device which easily (and affordably) combines communication, internet access and fun gadgetry into one sleek looking package.

Check out the official web page of the BlackBerry Storm.

It will be interesting to see what productivity and GTD applications come out for the Storm. Of course I will be reviewing them here when they do come out.