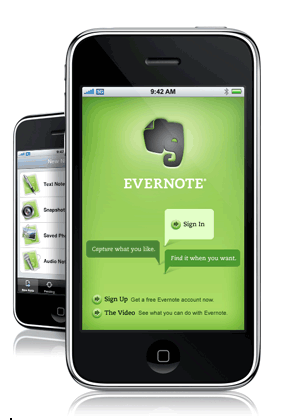 Evernote have just released version 1.4 of their fantastic note taking application for the iPhone.

The biggest feature for me is the ability to mark a note as a favorite and then view it when offline. This means that you can now use the power of the desktop client to utilize the file storage capability of the Evernote iPhone application.

I tend to add a lot of documents to Evernote from the Mac client, so the ability to mark these as favourites and always have them on my iPhone is a feature within Evernote that I have been waiting for.

I did a post yesterday about the YouTube Video Project from Evernote where they are getting users to create video notes of how they use Evernote in their daily lives.

There are so many ways to use Evernote and it seems that every time I speak to another Evernote user they enlighten me with some great way of adding another little trick to my ever growing arsenal.

With the local file storage capability it may replace my need for the file syncing applications on the iPhone as I will be able to do pretty much what I need on the iPhone.

As well as this, version 1.4 also brings:

You can download the Evernote iPhone application from the iTunes music store for free.

I am going to play with version 1.4 of Evernote over the coming few days and then I will let everybody know how I get one.

How do you use Evernote?, I would love to know..

One thought on “Evernote for iPhone 1.4 brings Local Storage”